I can’t find numbers today so no new update on that front.

What I can do though is give a more personal account of some of the troubles facing Malawians.

Malawi has a very large rural population so it is understandable that most of the relief efforts will focus there. Here in Blantyre, a city of just under a million people, there are still many problems and challenges. I want to introduce you to four people who live in Ndirande, an area stretching around the base of Ndirande Moutain. For many years the Presbyterian Church in Canada has supported a club, the Ndirande Handicapped Centre (formerly known as Tidzalerana) that hosts Malawians with various disabilities. 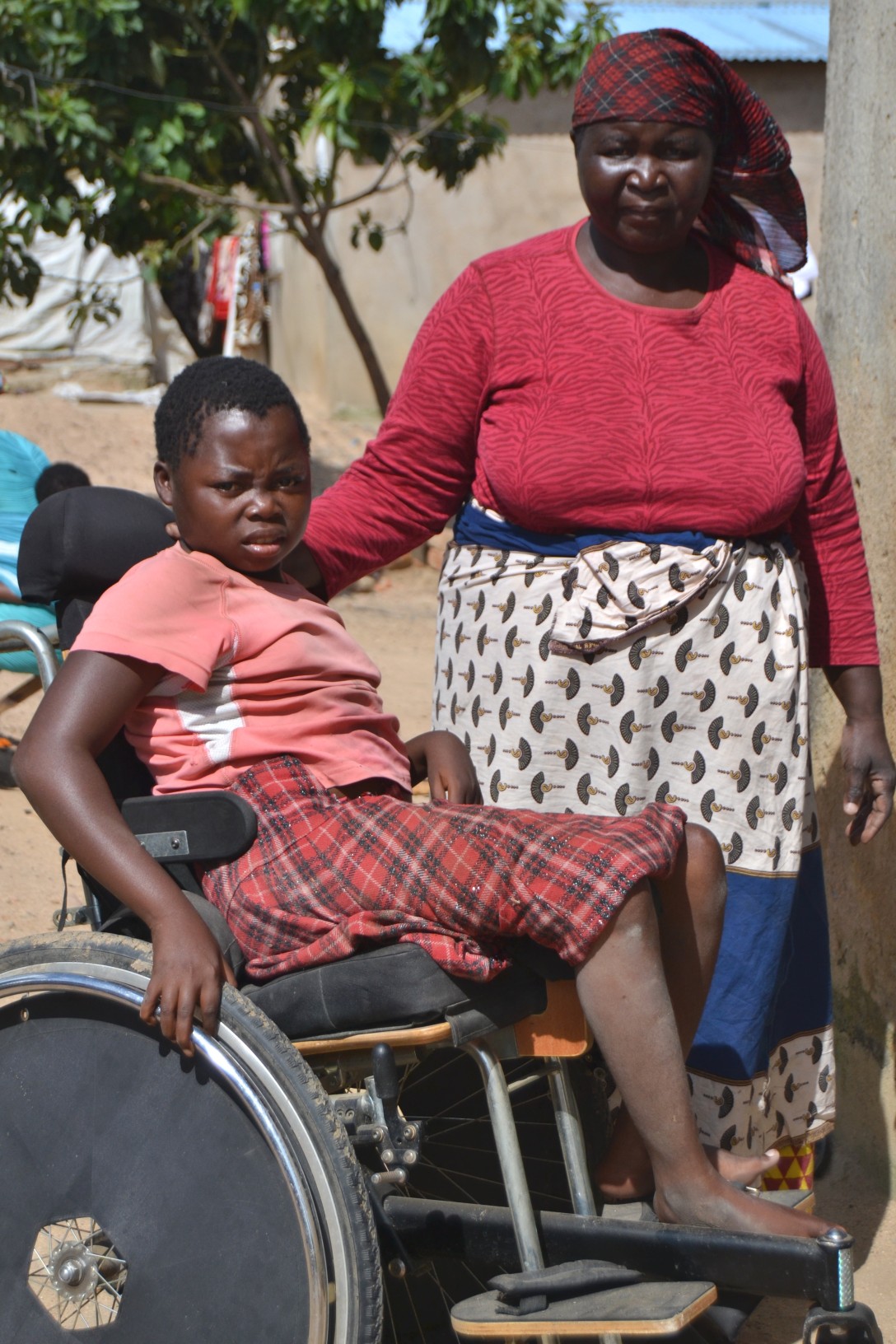 Shakira can’t walk. Here she is with her mother in her wheelchair provided by the club. As you look around the pictures you will see that nothing is wheelchair accessible. This includes the path to the latrine. Each time Shakira needs to go, her mother carries her the 25 meters.

In the rains Shakira’s brick latrine melted. The temporary latrine is surrounded by corrugated steel.

The pile of dirt in front is the old latrine, now dissolved. Shakira keeps getting cuts as she goes in an out the makeshift door.

Beatrice has another problem: three of four walls are gone on her house. As an adult who can’t walk there is not a lot of work for her. This means not a lot of income which in turn means sub-standard construction material.

In this picture you can see that the community has started to rebuild by making new bricks. These bricks are dug from the ground and, when it rains, they will return to the ground.

One thing that Beatrice has that her neighbours don’t is a good latrine. There were floods in Malawi in 2015 and in response, Presbyterian World Service and Development supported the construction of new latrines for club members. Besides giving Beatrice some basic human dignity, latrines that can withstand the rain make a significant contribution to community health. When human sewage floods there is a greater risk of cholera. There is no running water in large tracts of Ndirande. Residents rely on water trucks or more convenient sources like puddles and streams. Beatrice’s latrine at least protects the water sources closest to her.

Madalitso is likely in the most common situation in urban areas. Like Beatrice she also has a PWS&D latrine. Her house withstood more of the rain than others.

The corner pictured here (top right) fell outwards, thankfully not hurting anyone. She has put as much plastic sheeting over the most vulnerable places so that when the rains come again she might keep what remains of her house.

Finally, Cornelius. Upon arriving at his house he immediately lit up and hugged Hamilton Banda, a staff person at the club. As someone with Down Syndrome, Cornelius would have a very low chance of independent living. He lives with his family but it is obvious that the larger community means the world to him.

His family’s home lost one end. Hamilton, my guide on this trip, had an animated conversation with Cornelius’ mother. She wanted me to know that two of the walls had been reinforced in 2015 using PWS&D funds. She banged them to demonstrate that they were solid. I’m no architect or engineer but I know my way around a blueprint. Both walls were load bearing and I’m convinced that if they were not reinforced, the whole house would have collapsed. 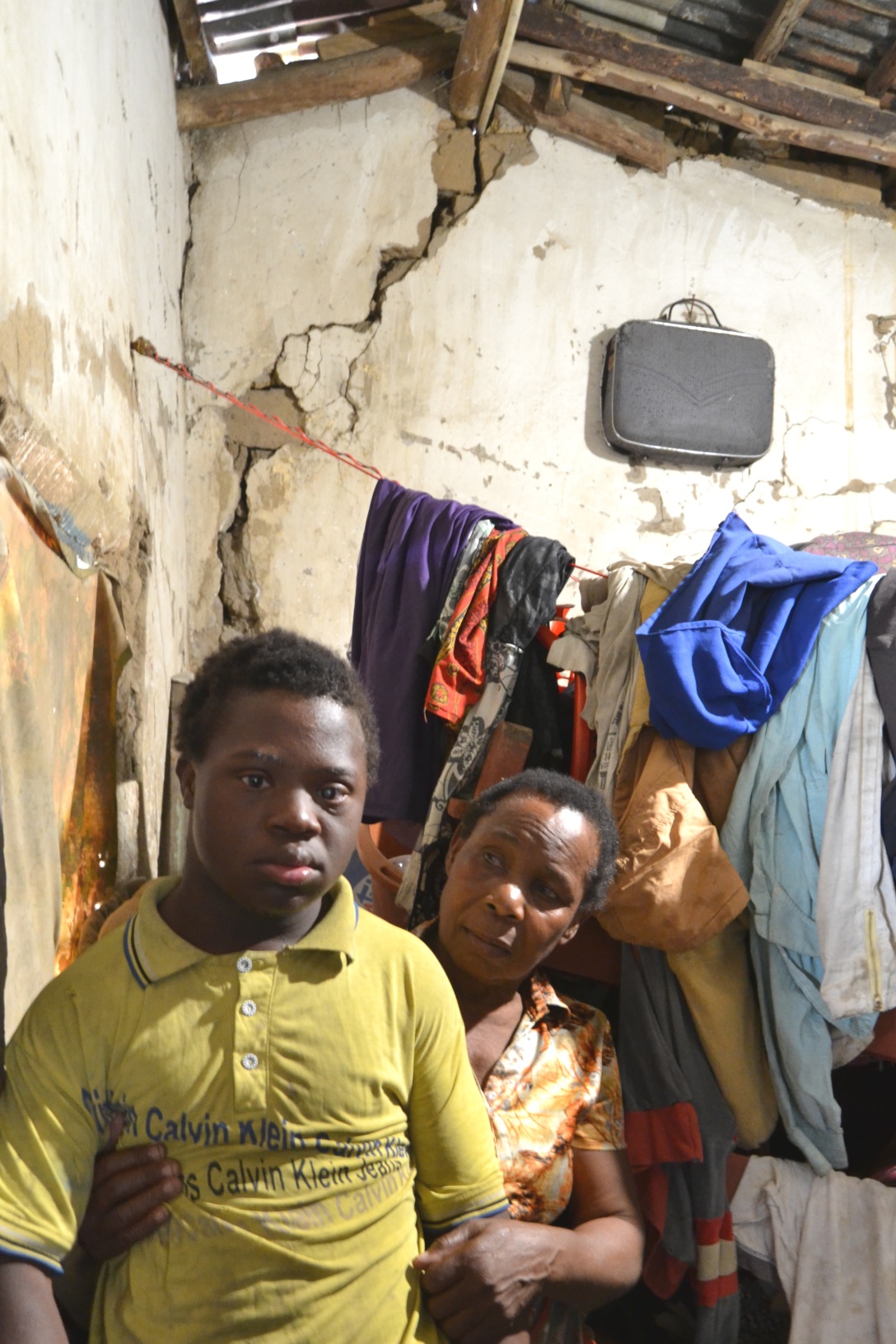 Cornelius has his own room. When I arrived it was being used to dry clothes but both he and his mother wanted me to see what concerns them most. You can see at the ridge line of the roof a crack has developed in the wall. This wall has been safe so far but the crack has widened recently. At the other end (out of the picture) is a reinforced wall. This mother’s concern for her son’s safety was obvious.